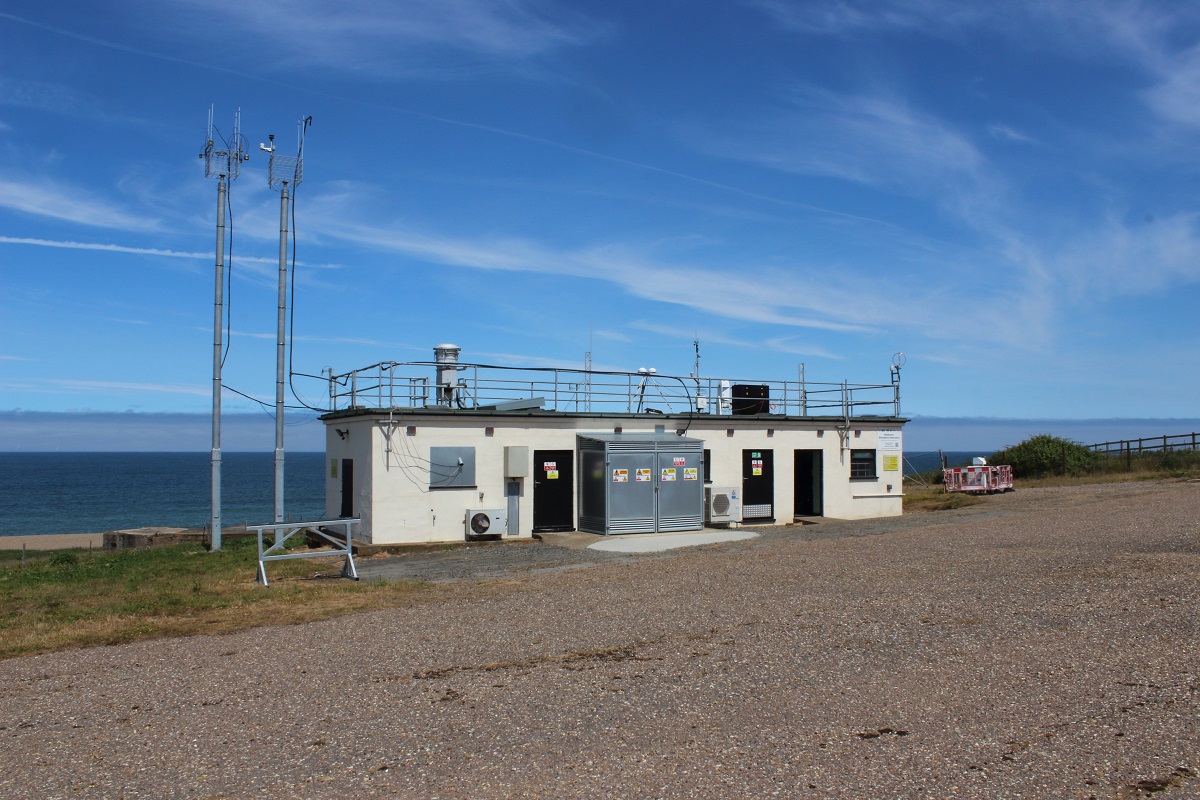 The Weybourne Atmospheric Observatory (WAO) is a Regional station in the Global Atmosphere Watch (GAW) programme of the World Meteorological Organization (WMO). It is situated on the North Norfolk coast (52°57’02’’N, 1°07’19’’E, 15 m asl). Weybourne is operated by the UEA having been established in 1992 by Professor Stuart Penkett (retired 2004) with funding from BP (Norway) plc and NERC. Subsequently, long term monitoring and campaigns have been supported through numerous projects funded by NERC, Department of the Environment (DoE, Defra) and the EU. NCAS has also supported the site since 2002. Much of the instrumentation has come from HEFCE JIF and SRIF funds.

Weybourne’s location means that it experiences air with a wide range of pollution levels. Predominant south-westerlies bring polluted air from the UK (including from London and the Midlands). At times, especially in anticyclonic conditions, Weybourne experiences polluted air from Europe. Weybourne can also receive clean background air in northerly airflow. This can be impacted by narrow pollution plumes from shipping in the N. Sea, and potentially gas platforms. 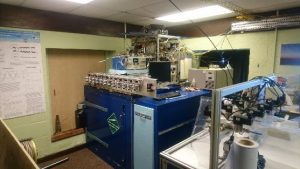 Over the years the parameters measured at Weybourne have varied according to the funding and/or scientific interests and requirements. There have been continuous measurements of ozone (O3), as part of the Defra network, and basic meteorological parameters. There are many years of CO, NOx, NOy, SO2, CN, VOC and H2 data. In 2007 a long term monitoring programme for CO2 and O2 began. In 2012 a new greenhouse gas GC was set up and measurements of CH4 started. This has been developed to also include measurements of N2O and SF6. In 2017 a state-of-the-art Fourier Transform Infrared Spectrometer (FTRI) was added to Weybourne to give very high precision measurements of additional CO2, CH4, N2O and CO. Finally in 2018 instruments were added to Weybourne to make long-term observation of atmospheric radon and particulate matter (PM1, PM2.5, PM4 and PM10).

Through the introduction of the FTIR to Weybourne in 2017, the site now forms part of the UK’s commitment to the EU funded Integrated Carbon Observation System (ICOS). This is a pan-European Research Infrastructure that provides very high quality, harmonised data on the cycles of carbon and other greenhouse gases. Through ICOS Weybourne has been at the forefront of instrument testing and has been fundamental in getting the FTIR instrument approved on the network. 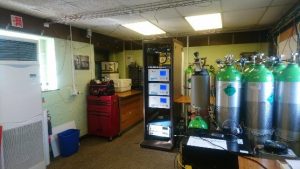 As well as being part of the ICOS network and part of the Defra ozone network (AURN), Weybourne has been / is part of the Defra TOMPS network (atmospheric toxic organic samplers), a Defra CH4 network, the EU InGOS network (Integrated non-CO2 Greenhouse gas Observing System) and is now contributing measurements to the NERC funded MOYA and DARE-UK projects.
Many successful campaigns have been hosted at WAO to examine oxidizing capacity, organic chemistry, carbonaceous particles, night-time chemistry and cloud impacts on radiation. The site is also used by the wider community for instrument testing.

This site is owned and operated by UEA and they run a range of instrumentation – see the community operated instruments section for details. 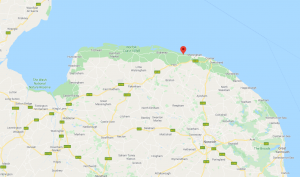 Weybourne receives air predominantly from across the Atlantic and from North-Western Europe. 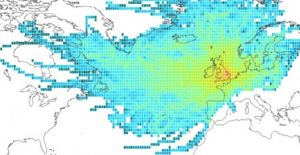 Relative frequency at which 5-day back trajectories passed over each 1x1ogrid cell before arriving at Weybourne (2000-1): red high frequency – blue low frequency.

The predominant wind directions are the south and west wind sectors as defined in the map. 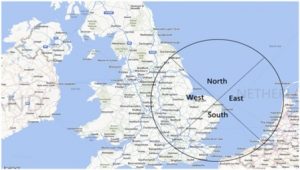 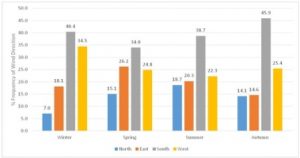 The average wind speeds tend to be highest from the north and west sectors.

Using the Met office NAME dispersion model Zoë Fleming (NCAS at the University of Leicester) has generated footprint plots on 3-hourly intervals, which illustrate where air arriving at WAO is mostly likely to have been close to the surface over the previous 10 days. 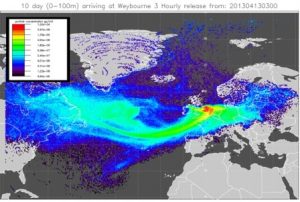 These footprints are created by model runs in which thousands of particles are released from the location of WAO and tracked backward in time. By examining the number of particles and the time they have spent close to the surface in defined regions we can quantify the expected influence of these regions on the air observed at WAO. 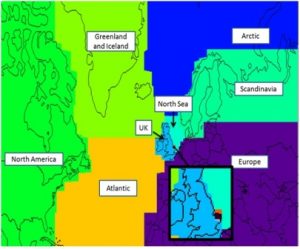 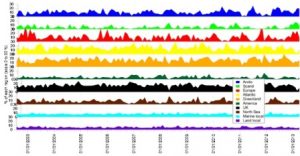 Clearly WAO is influenced by air that has been in the boundary layer over a number of different regions, in particular the UK, Europe, the Atlantic, Greenland and the Arctic. The influence of some regions tends to vary with season. E.g. Air from Europe tends to be more frequent in the winter than summer, whilst air from the Arctic is more frequent in the summer than in the winter. 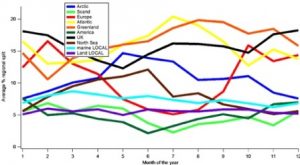 Monthly averages of the percentage influence of each region over the years 2002-13.

To examine the impact of the different regions on trace gas concentrations each footprint has been categorised by the dominant region. Although the NAME analysis suggests that for a lot of the footprints many of the particles have spent a considerable amount of time over the Atlantic and Greenland, these particles are often calculated to have passed through the boundary layer of regions much closer to WAO. For relatively short-lived gases, the emissions from the near-field regions are therefore likely to dominate. Each 3-hourly footprint was therefore assigned to one of 4 regions (UK, Europe, UK and Europe, and Arctic (and Greenland) illustrated below, if at least 10% of the footprint density was in that region. Footprints that did not qualify were assigned to “Mixture”. 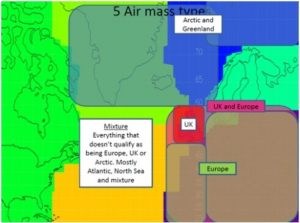 Regions for categorising each NAME footprint. 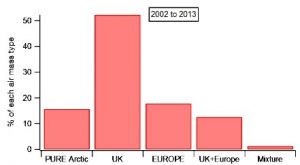 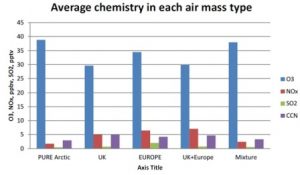 The wind sector analysis also shows that the ozone in air coming from the east exhibits greatest variance, with both very high (> 60 ppb) and very low (< 15 ppb) mixing ratios, whilst air from the north rarely has less than 25 ppb and air from the west rarely exceeds 45 ppb.

Ozone at WAO exhibits a strong seasonal cycle, with a spring maximum and winter minimum. Superimposed on this are elevated ozone episodes in the summer and periods of near-zero ozone in the winter. 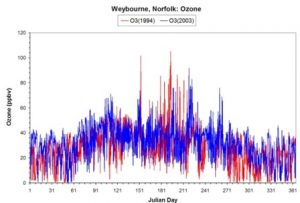 This is further illustrated by a general decline in the number of hours in which ozone mixing ratios exceed 60 ppb. 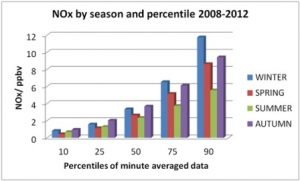 Hourly NOx concentration (ppb) percentiles as a function of the season at WAO averaged over the period 2008-2012.

It takes 45 minutes to drive to the site from Norwich International Airport, and approximately 1 hour from the University of East Anglia. Travel via public transport is also an option.

The Pheasant Hotel in Kelling is within a 20 minute walk from the observatory. https://www.pheasanthotelnorfolk.co.uk/

The Kings Head B&B and restaurant is situated in the market town of Holt which is approximately 10 minutes by car.  https://www.kingsheadholt.org.uk/

The Weybourne Atmospheric Observatory operates under conditions that are subject to the Health and Safety at Work Act. It is essential that each individual working at Weybourne makes safety their first priority.

Users must complete the necessary Health and Safety Forms (i.e. Risk Assessments, COSHH assessments) dealing with individual activities before any person is allowed to work at Weybourne. These risk assessments and COSHH must be approved by the station manager. In addition any users of the observatory must familiarise themselves with the facilities risk assessment and must complete a safety induction.

The following potential risks have been identified as possibly being present at Weybourne They may not be exhaustive and “common sense” should prevail on site.

As the facility is not permanently manned any user organised deliveries will need to be arranged directly with Dr Grant Forster.

The facility is accessed via the Muckleburgh Military Collection from the coast road between Kelling and Weybourne on the A149. The main gate of the collection is locked after 16:40 daily, but key access can be arranged.

Lone working is discouraged at the site and policies should be in place to enable a safe working environment should personnel find themselves alone on site. We operate a “buddy” system which is described in more detail in during the Induction training.

There are no user configurable instruments at this site

Thermo Scientific Model 42i Analyzer: nitric oxide (NO) and nitrogen dioxide (NO2)

Thermo Scientific™ Model 43i SO2 Analyzer: sulfur dioxide (SO2)