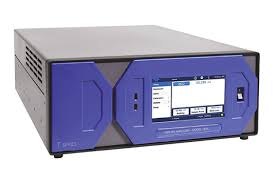 The T500U CAPS NO2 Analyzer represents the next generation of criteria pollutant monitoring technology for the direct measurement of Nitrogen Dioxide (NO2) in air. The instrument utilizes a patented Cavity Attenuated Phase Shift (CAPS) technique to provide an extremely sensitive, fast and accurate NO2 measurement in a cost-effective and low maintenance instrument package.

The T500U provides a direct NO2 measurement, eliminating the need for catalytic conversion or reagents which introduce measurement artifacts inherent in traditional heated metal converter based chemiluminescence instruments. The CAPS measurement approach also reduces maintenance items and removes the need for hazardous materials and high-temperature scrubbers within the instrument. The T500U has an expected maintenance interval of one year under typical ambient monitoring conditions.

All T Series instruments offer an advanced color display, capacitive touch screen, intuitive user interface, flexible I/0, and built-in data acquisition capability. All instrument set up, control and access to stored data and diagnostic information is available through the front panel, or via RS232, Ethernet, or USB com ports, either locally or by remote connection.

Teledyne API’s Model T500U CAPS NO2 Analyzer uses Cavity-Attenuated Phase-Shift (CAPS) spectroscopy to render true measurements of nitrogen dioxide (NO2). The T500U operates as an optical absorption spectrometer, wherein the absorbance (lost light) is directly proportional to the path-length and the concentration of the absorbing gas (Beer-Lambert law), providing a direct measurement of NO2.

The T500U uses few components: an optical cell, a pair of highly reflective spherical mirrors centered at 450nm (strong NO2 absorbance band), a light-emitting diode (LED), and a vacuum photodiode detector. The LED is located behind a mirror at one end of the cell, and the detector behind the other mirror at the opposite end of the cell. The LED emits ultraviolet light (UV) into the cell; the light reflects back and forth between the two mirrors, building intensity and running a very long path length. The long path length extends the “time” or “life” of the photon, thus providing ample time to measure absorbance when NO2 is present. Through the use of precisely timed data acquisition coupled with a proprietary algorithm, the measured absorption is translated into a phase shift, from which the NO2 concentration is calculated. The phase shift decreases as the NO2 signal increases.

The CAPS method is faster than the traditional chemiluminescence method since the sample does not require cycling through a catalytic converter to calculate a difference measurement. Its speed also makes measurement more precise due to the ability to capture samples closer to “real-time” before ventilation vortices

As and when required