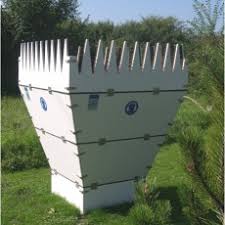 SODAR (SOnic Detection And Ranging), also written as sodar, is a meteorological instrument used as a wind profiler to measure the scattering of sound waves by atmospheric turbulence.

SODAR systems are used to measure wind speed at various heights above the ground, and the thermodynamic structure of the lower layer of the atmosphere.

A Sodar works by sending out a sound pulse (beep) and recording the sound as it’s scattered off atmospheric turbulence back to the Sodar. The principle is very similar to the well known radar technique which transmits a radio wave and records echoes from objects.

Phased-array antenna systems use a single array of speaker drivers and horns (transducers), and the beams are electronically steered by phasing the transducers appropriately. To set up a phased-array antenna, the pointing direction of the array is either level, or oriented as specified by the manufacturer.

The horizontal components of the wind velocity are calculated from the radially measured Doppler shifts and the specified tilt angle from the vertical. The tilt angle, or zenith angle, is generally 15 to 30 degrees, and the horizontal beams are typically oriented at right angles to one another.

The vertical range of sodars is approximately 0.2 to 2 kilometers (km) and is a function of frequency, power output, atmospheric stability, turbulence, and, most importantly, the noise environment in which a sodar is operated.

Operating frequencies range from less than 1000 Hz to over 4000 Hz, with power levels up to several hundred watts. Due to the attenuation characteristics of the atmosphere, high power, lower frequency sodars will generally produce greater height coverage.

Some sodars can be operated in different modes to better match vertical resolution and range to the application. This is accomplished through a relaxation between pulse length and maximum altitude.

The system is serviced and calibrated as and when needed.

Data can be obtained through a request to Grant Forster.