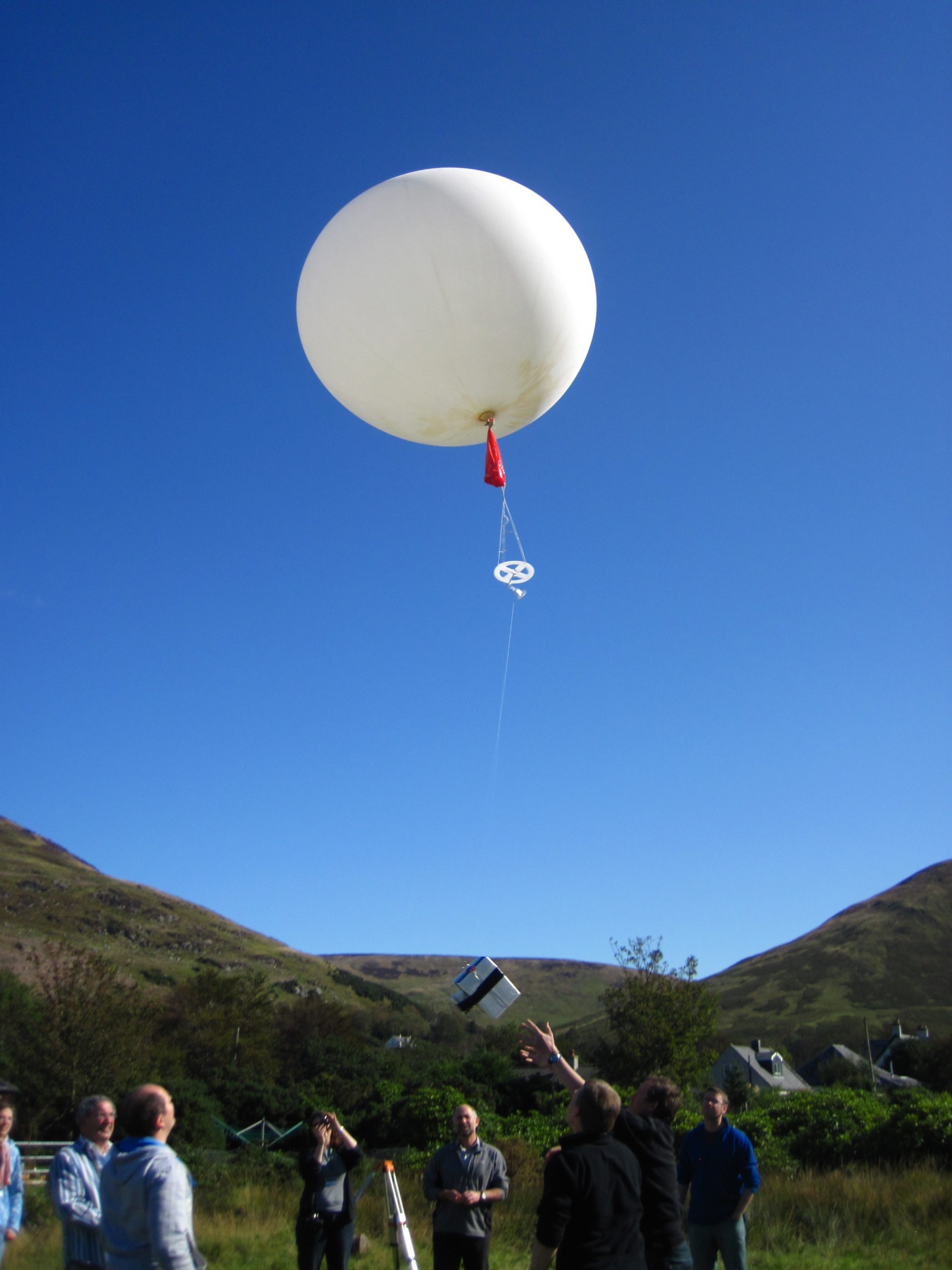 Vaisala sounding products are used by meteorological organizations all around the world to measure weather in the Earth’s atmosphere, from the boundary layer to the upper atmosphere.

The Vaisala DigiCORA® Sounding System simplifies daily synoptic observation by receiving, processing and forwarding meteorological information surely and securely. It is also an excellent tool for research as well as for special measurement campaigns. It gives the user comfortable control over the sounding process by integrating sounding controls, archiving the sounding data, and meteorological message creation. For routine soundings, the system offers a variety of features and allows the desired balance of manual and automatic control.

In addition to the traditional alphanumeric messages, the system software produces the WMO specified BUFR messages. This feature enables users to follow the WMO’s recommendation to move from traditional alphanumeric codes to binary BUFR codes. NCAS has an MoU with the UKMO which allows these messages to be automatically ingested and used in subsequent NWP modelling. We encourage all users to follow the upload procedure.

Two sounding systems are available: one situated in Manchester and one in Leeds, both are compatible with both Vaisala RS92 and Vaisala RS41 sonde family and support the extended sondes recommended by Vaisala. Both systems are 400 MHz variants.

We have two units available:

The satellite signal from the antenna is band-pass filtered and amplified. For maximum tolerance against external RF interference, the first band-pass filter with low insertion loss is placed before the first amplifier. Downconversion of the GPS signal is performed in ASIC, which also adjusts the gain level to be optimal in all conditions.

The RF front end ASIC communicates with the second ASIC, which includes baseband parts of the GPS receiver as well as a processor, memories and a set of peripherals. By using an ASIC designed for radiosonde application, maximum performance is achieved at a reasonable cost level.

An important and part of the ccGPS receiver design is the search engine. It is a matched filter that searches in a parallel fashion for all possible satellite ID’s overall possible Doppler frequency bins. It enables probably faster GPS signal acquisition times than any other receiver and requires no information about satellites or GPS time beforehand. By using this approach, it takes less than 20 seconds from sonde power-up until the ground equipment produces valid wind data. For comparison, best time-to-first-fix values for commercial GPS receivers (in cold start mode) are 45 seconds.

The receiver has 12 correlators or channels for signal tracking. Satellite signal C/A code and carrier measurements are processed and packed by an on-chip DSP (Digital Signal Processing) and transmitted to the ground for DGPS calculations.

By sending the raw ccGPS measurement data for the ground equipment for further processing, many benefits can be realized:

The GPS receiver is designed to have large “safety margin” in tracking capability. This means that in typical conditions, all visible satellites can be found and tracked down to elevation of 0° and even lower in high altitudes.

This is also seen as reliability and high wind data availability, because signals are continuously tracked once found even in a harsh environment. The dynamic conditions in a sounding do not disturb the receiver due to this application specific ccGPS receiver technology.

One of the sounding series with the latest RS92 GPS prototype was conducted in July, 2002 including 77 test sondes. Based on these, the ccGPS receiver tracking capability is excellent and signal acquisition time very short (few seconds). This specific test was carried out in two locations, Finland and Malaysia. Results are shown in the following table.

Although most of the sondes were released almost immediately after being brought out from the shelter, there were no start gaps in most of the soundings, and maximum gap values were less than 15 seconds.

GPS Operation in the Presence of RF Interference

Many sounding stations are located in areas with sources of heavy RF interference, typically different types of radar. This fact was taken into account when designing RS92. Two features guarantee the best possible operation within the presence of strong RF interference:

The performance of the sonde has been tested at multiple sites, in various global locations. The sounding site in Malaysia has a radar in close proximity, causing RS80 GPS malfunction and data loss. However, there was no sign of the radar interference with RS92 while the reference RS80 sonde was strongly affected by the radar.

By using differential GPS, many error sources common to both receivers are eliminated. This means better accuracy for navigation. Position and velocity measurement accuracy is tested in static tests and in double soundings with RS90-AG sonde, which is proven to produce very high accuracy velocity data, when the sufficent number of satellites is available. Preliminary uncertainty (accuracy) results are shown in the table 3.

Transmitter functions are mainly performed in ASIC. This circuit includes data coding, modulation, mixing with RF and D/A conversion. The transmission is stable and narrow band due to the use of temperature compensated crystal oscillator and on-chip synthesizer.

The data is first Gaussian filtered and its modulation type is GMSK, which is used for example in GSM mobile phones. This approach uses spectrum efficiently and with advanced receiver technology, it is possible to reduce the sonde output power, while telemetry range performance and data availability remains excellent.

RS92 GPS sondes are designed to be compliant with the proposed ETSI standard for digital radiosondes (ETSI EN 302 054-1).

All data is protected with CRC-16 (16-bit cyclic redundancy checksum). Transmission errors can be reliably detected, and only valid data is passed to the user.

A test flight with 32 Radiosondes was performed at Vaisala using DigiCORA III, RB21 antenna, URR20 and UPP210A radio and RS92. The test showed even without using any error-correction coding algorithms, an average of 1.4% missing raw data due to telemetry. This result is regarded as very good for radiosonde telemetry conditions.

A complex error-correcting coding scheme, called Reed-Solomon, is used in the RS92 sonde. Reed-Solomon coding makes it possible to fix most of the errors that occurred during data transmission. It is thus possible to use a lower output power in the sonde and still have even higher reliability telemetry link, or in other words, lower bit error rate.

Use of Reed-Solomon error-correction coding feature is available only in new Vaisala radio receiver products. Although the system performance and data availability is high with the current URR and UPP receiver system, it is recommended to use RS92 sondes with the new DigiCORA III incorporating the new Vaisala radio receiver. This way the user will achieve the highest possible data availability and quality.

The RS41 sonde makes use of improved temperature and humidity sensors and no longer measure pressure directly. Where the sonde is also measuring winds pressure is determined from GPS derived altitude and a standard atmospheric model of the atmosphere.

The small size of the sonde Thermocap® temperature sensor construction minimizes the response time (lag) and the effects of solar and infrared radiation. The test results of the sensor in the RS92 transducer construction show consistent performance.

The high accuracy calibration unit, Vaisala CAL4, is used for the sensor calibration. The accuracy test is performed in a simulation chamber. All reference instruments used for calibration and testing are traceable to national or international standards.

The RS41 – SG default base model sonde does not measure pressure directly. The pressure is determined from GPS height, launch conditions, and the American standard atmospheric model.

Users wishing to ensure direct measurement of pressure are advised to use the RS41 – SGP.

The humidity measurement accuracy is dependent on such factors as calibration accuracy, sensor stability, time response, and solar radiation.

One subject of special interest is the humidity sensor performance in the presence of external contaminants during storage. The operation principle of radiosonde humidity sensors is based on the water molecule absorption. If the sensor is made sensitive enough for detailed humidity sensing; it will also be sensitive to other so-called contamination molecules. This can yield to low bias humidity reading, if not properly taking care of. One method to control the contaminants is to cover the sensor with seal and proper desiccant, as utilized in RS80 radiosonde family packaging

Another method is to remove the possible contaminants by substantial sensor preheating before sensor factory calibration and repeating the preheating prior to the sonde launch. The original calibration can be recovered despite any contamination that occurs during storage.

The only component of the system that requires calibration is the sensors in the RS92 ground check and the RS92 & RS41 sonds themselves.

Ground check temperature and humidity sensors are replaced once a year or sooner if required.

Shipping Unit 1 (based in Manchester)

Shipping Unit 2 (based in Leeds)

The system when packed ready for shipping consists of a single flight case.

The signal processing unit, sounding computer, and ground check station need to be powered and sheltered from weather.

The antenna tripod can be no more than 50m from the signal processing unit sounding computer, and ground check station.

Approximately 1m of bench space is required for the signal processing unit, sounding computer, and ground check station and each of these will need access to 240VAC power.

The antenna require as great a view of the sky as possible. Sites in valleys or in the vicinity of mountains often lose ‘sight’ of a sonde early due to obstruction.

Although it is convenient for the balloon to be filled near to where the sounding computer is located, this is not a limiting factor for site selection.

Filling the balloon is made easier if shelter can be provided.

The launch area should be clear of obstructions.

Cylinder handling and use of compressed gas

When unpacked and deployed:

There are a range of balloons used in meteorology and they are named by weight: that is the weight of unfilled balloon. The RS92 sonde weighs about 280 to 290g and RS41 around 140g – the algorithms inside the sonde that correct for heating due to solar radiation assume an ascent rate of 5.3 m s-1.

Each balloon has different properties. The properties for each balloon have been calculated for the totex range of balloons and provide the user with approximate bursting altitude and volume of helium required to launch a standard RS92. It is advised that the TA 1200 be used for ozone sonds.