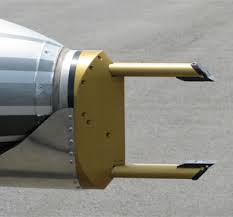 The High Volume Precipitation Spectrometer (HVPS) is a 2D shadow probe with a 128 element detector array focused to 150 μm per pixel in the probe sample volume (19.2 mm in total). The probe electronics are comparatively fast, giving the probe an extremely large sample volume with very little dead time. At aircraft speed, the sample volume is of the order of 37 litres per second. The HVPS detectors are a single bit (on / off).

The extremely large sample volume and large pixel size make the HVPS ideal in applications where the largest cloud particles are of interest such as cirrus measurements and precipitation formation studies.

The SPEC HVPS-3 (High Volume Precipitation Spectrometer) is a probe for measuring the size, shape, and concentration of large cloud particles. It consists of a laser beam approximately 19.2 mm in width and 161 mm in open path length. The beam is aimed at a 128 element photo-detector array. As particles pass through the sample volume, a series of one-dimensional slices of an image is built up, as elements of the photo-detector arrays are shadowed from the laser illumination. These slices are built up into two-dimensional shadow images of particles at a rate determined by the aircraft airspeed.

Due to the beam and photodetector array geometry, the probe is sensitive to particles between 150 μm and 19.2 mm – 2D detector element size up to detector array width. It’s very high sample volume means that a large number of particles are sampled, giving high spatial resolution at aircraft operating speeds and exceptional counting statistics even for the largest particles.

HVPS-3 sizing accuracy can be checked for consistency against other cloud probes such as 2DS, CIP and 3V-CPI. Periodic calibrations take place in the laboratory in Manchester, but there is no requirement for field calibration. The sizing performance of the probe is very stable.

There are no servicing requirements apart from the cleaning of the optical windows at regular intervals.

This is primarily an aircraft probe for use on the FAAM 146 aircraft. The design of ground-based cloud experiments is beyond the scope of this document. Please contact the IS for further information or to discuss your requirements.

Weight (not including shipping case): 9.5 kg

n.b. Power consumption figure does not include the data acquisition computer.

While raw images can be produced fairly quickly, full quality control and production of corrected time series data are computationally expensive and time-consuming.