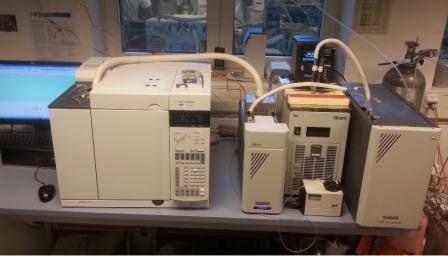 The instrument has the capability to measure speciated VOCs with detection limits of 2-3 pptV. Measurements of VOCs at the CVAO are made from a height of 7.5m. Air is pulled through a communal 40mm diameter heated glass manifold and then through 2m of 1/8” heated stainless steel tubing. The air passes through a 1.2 μm particulate filter and through a condensation trap (glass tube held at -30°C) which removes the water before it enters the instrument.

Sample volumes of up to one litre of air are acquired and then the trap is resistively heated during desorption within a stream of helium (or hydrogen) and injected into the GC oven for analysis. The eluent is split in approximately equal portions between a Na2SO4 deactivated aluminium oxide (Al2O3) porous layer open tubular (PLOT) column (50 m, 0.53 mm id, Varian Netherlands) for analysis of the less polar NMHCs and a LOWOX columns (10 m, 0.53 mm id, Varian Netherlands) for analysis of the more polar VOCs including oxygenated species. Flow restrictors are placed upstream of the LOWOX column in order to provide a balance in back pressure such that the sample split between columns is maintained at, or close to, the desired 50:50. Observations of toluene, baseline resolved on both channels of the system, are used to measure the exact split ratio during each run. Analytes elute from the GC columns into two flame ionisation detectors for detection. The GC oven has been programmed for optimal separation of all compounds of interest.

An autosampler multiposition valve set-up allows automatic programming of air, nitrogen blank, no flow samples and calibrations.
The measurements are made on a continuous basis and samples are obtained roughly every hour.

The data is available through the Centre for Environmental Data Analysis (CEDA), and so can be used as supporting data to interpret other measurements or can be inputted into atmospheric models over a range of timescales.

The dual channel gas chromatograph system with flame ionisation detection (DC-GC-FID) described by Hopkins et al. (2003 and 2011) has been used to measure atmospheric concentrations of a range of volatile organic compounds (VOC) for both in situ ground-based deployments and for analysis of whole air samples from canisters collected from aircraft, glass tubes and Tedlar bags. In each case the instrument is operated in much the same way, with the only difference being in the delivery of the sample into the system.

Many of the compounds of interest are present in the atmosphere at levels too low for quantitative detection, therefore, large volume sampling involving a concentration stage using an adsorbent trap is required before the samples are analysed.

Gas chromatography is a separation method that relies on differences in partitioning behaviour between a flowing mobile phase (carrier gas) and a stationary phase (column coating) to separate the components in a mixture.

The flame ionisation detector (FID) consists of a hydrogen-air flame within which organic compounds contained in the column eluent burn to produce ions which travel to the collector electrode held at a negative potential. The current produced is measured and is proportional to the number of ions present in the flame which in turn is proportional the concentration of each species.

For a given set of conditions, the retention time (time it takes for a particular compound to reach the end of the column) is fixed for each compound. Using calibration mixtures of known composition and concentration allows us to positively identify each compound/peak and also calibrate the instrument.

Given the large number of compounds which the instrument is capable of measuring, a number of different calibration methods are required. We work closely with European and global partners in an effort to devise best practices in the calibration of this instrument. For more information on these, please contact the Instrument Scientist (IS).

Peak identification of NMHCs has been achieved by reference to a number of certified gas standard mixtures combined with headspace injection of single NMHCs. Baseline resolved peak separations are achieved for VOCs between C2 and C4; however, as the number of carbon atoms increases, so too does the number of isomers with similar volatilities and polarities which can lead to difficulties in resolution and uncertainty in identification using the FID alone. For example, 2-methylpentane and 3-methyl-pentane are found to be poorly resolved from each other on a typical PLOT column leading to an increase in the limit of their detection and consequently only the sum of their mixing ratios can be typically reported. The majority of the compounds of interest are sufficiently well resolved to be reported individually, and the repeatability of retention times is such that they are identified with a high degree of confidence.

Calibration of NMHCs is performed by reference to an NPL ozone precursor mix. This calibration scale has been adopted by the GAW-VOC network and hence the measurements of NMHCs made by this instrument are directly comparable to those made by all of the GAW global observatories.

Calibrations are performed each month or more frequently if field deployment allows. A long-term data set of the response of the instrument is held and regularly updated to ensure that the instrument responses do not change and to highlight any issues with stability of components within the gas standards we use.

Calibration of oxygenated volatile organic compounds (OVOCs) has been achieved by reference to a gas standard mixture containing 12 oxygenated compounds and two NMHCs at mixing ratios around 500 ppb. Long-term storage of oxygenated compounds in cylinders is also problematic due to wall losses, which tend to be more extreme at lower concentrations, hence mixtures of OVOCs are often supplied at higher mixing ratios. A dynamic dilution system featuring two mass flow controllers has been adopted to dilute a concentrated calibration mixture in a stream of humidified nitrogen to the low ppb range, closer to typical atmospheric concentrations. Despite being stored at the 500 ppb level, degradation of some of the OVOCs was observed after only a few months, rendering the cylinder inadequate for quantification purposes. Initial calibrations performed when the cylinder was new have been used to calculate the response of the FID relative to propane (known to be stable in cylinders) and so subsequent calibrations of the OVOCs are all related to the instrument response to propane. Changes in sample volume or basic response of the detector will be accounted for since these will affect the propane response to the same degree; however, compound specific issues such as changes in adsorption/desorption efficiency or internal losses are not accounted for. Ideally for both monoterpenes and for oxygenated VOCs a routine field calibration approach would be used at a similar frequency to calibrations performed for non-methane hydrocarbons. We find from practical experience that the instability and uncertainty associated with monoterpene and oxygenated VOC gas standards over the long term (on the timescale of a year or more) far exceed the actual changes in instrument response. Testing new methods of calibration will continue to find an improved solution for OVOC calibration. However, our current approach is pragmatic and uses indirect calibration and relies on the well-documented stability and uniformity in the response of the flame ionisation detector.

The linearity of the flame ionisation detector (FID) allows the calibration factors for other VOCs to be calculated based on their structure. Certain compounds, particularly oxygenated VOCs cannot be stored in cylinders without loss to surfaces impacting their stability, hence their theoretical response is used.