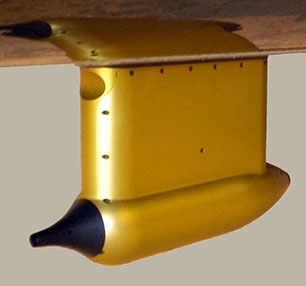 The CPI can image and count particles in the size range of 15-2500um, with the images having a nominal 2.3um resolution. Image analysis and data processing software provided with the probe takes particle size information (including area and volume) and ice crystal habit classification from the images to produce histograms etc.

The CPI is especially suitable for use in ice and mixed-phase clouds which typically have relatively low (compared to water clouds) particle concentration of 1000/L.

While designed for aircraft use, and able to operate at any aircraft speed and altitude, the CPI, with the use of a suitable aspiration device may also be used for ground-based or lab studies.

The unit available here is a 3V-CPI (3-View Cloud Particle Imager). This is essentially a 400 frame per second CPI probe integrated with a 2D-S probe.

The SPEC-3V-CPI (3V-CPI; 3 View Cloud Particle Imager) is a probe for measuring the size, shape, and concentration of airborne particles. It has two independent shadow sensor channels to increase counting efficiency and to produce stereoscopic images. Each of these channels consists of a laser beam approximately 1.6 mm in width and 61 mm in open path length. The beams are aimed at 128 element photo-detector arrays (one per channel). As particles pass through the sample volume, a series of one-dimensional slices of an image is built up, as elements of the photo-detector arrays are shadowed from the laser illumination. These slices are built up into two-dimensional shadow images of particles at a rate determined by the aircraft airspeed. When particles are detected by the 2D shadow sensors, a pulsed imaging laser (810 nm; 100 W; 200 ns min, 0.04% duty cycle; 1.0 kHz max repetition) is triggered to illuminate the particles for imaging using a magnified CCD camera (2.21 μm per pixel).

Due to the beam and photodetector geometry, the probe is sensitive to particles between 10 μm and 2263 μm, – 2D detector element size up to CCD array size. It’s very high sample volume and extremely fast sample rate means that a large number of particles are sampled, giving high spatial resolution at aircraft operating speeds.

Sizing accuracy is checked for consistency against other cloud probes such as 2DS and CIP. Periodic calibrations take place in the laboratory in Manchester, but there is no requirement for field calibration. The sizing performance of the probe is very stable.

There are no servicing requirements apart from the cleaning of the optical windows at regular intervals.

The system when packed ready for shipping consists of two boxes:

For use on the FAAM aircraft, 3v-CPI must be used in conjunction with the Manchester cloud physics rack. Please contact the IS for further information.

The design of ground-based cloud experiments is beyond the scope of this document. Please contact the IS for further information or to discuss your requirements.

Weight (not including shipping case): ~20 kg