This is an NCAS instrument and has no Calendar 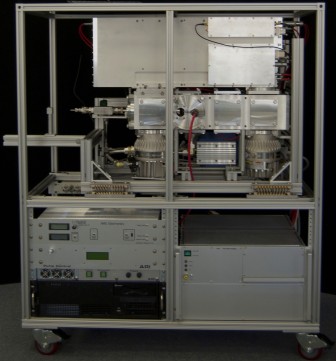 As a service to the wider community, the AMOF website “showcases” facilities that are not operated or supported by AMOF.

This is not an AMOF instrument please do not apply to AMOF for access.

The Aerodyne aerosol mass spectrometer (AMS) is the only currently available instrument capable of providing quantitative size and chemical mass loading information in real-time for non-refractory submicron aerosol particles. The AMS couples size-resolved particle sampling and mass spectrometric techniques into a single real-time measurement system. The Aerodyne AMS has been deployed worldwide at fixed sites, and on mobile laboratory, ship and aircraft platforms. Over 100 instruments are in use in industrial, academic and government laboratories.

Scientifically, the instrument can deliver quantitative mass concentrations of the major non-refractory chemical species present in submicron particles (ammonium, nitrate, sulphate, organics and non-sea-salt chloride) in micrograms per cubic metre. It is also capable of delivering these concentrations as a function of diameter as a dM/dlog(D) distribution. Further to this, information on the chemical nature of the organic fraction can be derived by inspecting the relative sizes of the peaks within the mass spectrum. In order to produce fully quality assured and meaningful results, the data must be processed offline or near-real-time.

The Compact Time-of-Flight Aerosol Mass Spectrometer (C-ToF AMS) was developed by Aerodyne Research Inc., Billerica, MA, USA. The instrument measures the volatile and semi-volatile chemical components of aerosol particles as a function of particle size over the size range ~ 60nm to 600nm with 100% efficiency. The efficiency rapidly falls off either side of this window.

The C-ToF-AMS consists of three differentially pumped chambers, constructed within a single aluminium block hereafter referred to as the “AMS body”, to which a number of sub-units or components are attached.

The first chamber in the AMS body houses an aerodynamic lens, which focuses the particles entering it, through a critical orifice, into a collimated beam of less than 1mm diameter. Gas molecules are not focussed and are highly divergent when they exit the lens. Beyond this lens, and still within the first chamber, the focused aerosol pass through a gas skimmer cone which removes the majority of the divergent gas molecules, but allows the aerosol particles (at near 100% efficiency for those 50-600 nm in diameter) to pass into the “Particle Time Of Flight” (P-ToF) chamber.

The P-ToF chamber houses a chopper wheel, which consists of a spinning disc with two radial slits cut into it. This can be positioned to fully block the aerosol beam or to “chop” it by allowing the slits to intercept the collimated aerosol beam as it enters the chamber. The chopper can also be withdrawn from the beam completely to allow all aerosols through. These travel the full length of the P-ToF chamber and into the “detection” chamber.

This third differentially pumped region houses a heated surface onto which the aerosols are directed, a tungsten filament and a time-of-flight mass spectrometer. Particles impacting onto the heated surface undergo flash vaporisation of the volatile and semi-volatile components of the aerosol, and a kinetic gas is formed. This kinetic gas passes the tungsten filament and is ionised separately by standard electron impact ionisation at 70 eV. The charged fragments produced are detected by the time-of-flight mass spectrometer, which samples all mass to charge ratios (Dalton numbers or Atomic Mass Units, AMU) from 1 to 300 AMU. The separation of the ionisation process from the thermal ablation (vaporisation) of the aerosol enables the analysis of component mass fragments to be quantitative.

In addition to the mass spectrometer, a home built SMPS unit is built into the rack covering the size range ~20-350nm at sea level. Although this is a home-built system, the principle of operation is the same as that described in the AMF ‘SMPS’ section.

The system requires a PC and the manufacturer’s software to run the instrument. These will be supplied with the SMPS.

It is possible to connect the PC to the internet and monitor remotely, with packages such as VNC. However, local internet access and firewalls may prevent this. Users must consult with their service provider. Other software for remote connection may be applied to the PC, but this must be agreed with the IS before any installation.

When not being used on the aircraft:

The instrument is serviced annually by the manufacturer if the instrument has been used extensively. This includes checking the flow rate, optics alignment and replacing filters and tubing

It should be noted that there is no absolute calibration standard for particle number concentration. The sizing and counting efficiency is checked using PSL spheres and a reference counter.

A basic service check will be performed on the unit before it is shipped to the user.

In most circumstances, shipping will be organised by the Instrument Scientist.

Under most circumstances, the Aerodyne Compact Time of Flight Aerosol Mass Spectrometer will be flown on the FAAM research aircraft.

When not being used on the FAAM aircraft

The instrument needs to be housed in a dry environment that does not exceed the environmental conditions as detailed in the specifications. The instrument should be situated on a level surface.

The in-built SMPS unit operates with a sealed radioactive source, known as the neutraliser. The source is Sr-90, a beta with an activity of 370MBeq. The University of Manchester has a mobile license and can operate it around the country and the research aircraft also has a licence to operate dangerous goods. However, all users who require the use of the AMS must have their own site licence to house this source and have spare capacity on the licence. If this source is to be used away from the host institute, then users must have a mobile licence, with capacity for the source. Before any loan of the AMF AMS is agreed, the users must supply proof of the licence and the spare capacity to the IS and a copy of the local rules for handling and storage of Radioactive substances for approval by University of Manchester local Radiological Protection Officer.

If the AMS is to be used on a project where the IS will be in attendance all the time, then alternative arrangements can be made. This may incur extra costs, either as T&S or as VAD.

Users are responsible for the transport of these sources and specialist couriers with the appropriate dangerous goods licences may be required. A copy of the courier’s licence will be required before any source is released.

Ionising Radiation (when not used on the research aircraft)

This instrument measures the size-resolved mass concentration per cubic metre of non-refractory particles in the size range of ~ 60nm to 600nm (at sea level). Non-refractory particles include sulphates, nitrates, organics, and ammonium. Specifically, the AMS will record any substance in the solid or liquid phase with a flash vapourisation temperature of 600°C or less. This excludes most metals, dust and sea salt. These can be presented as time series of mass, mass spectra, and mass size distribution