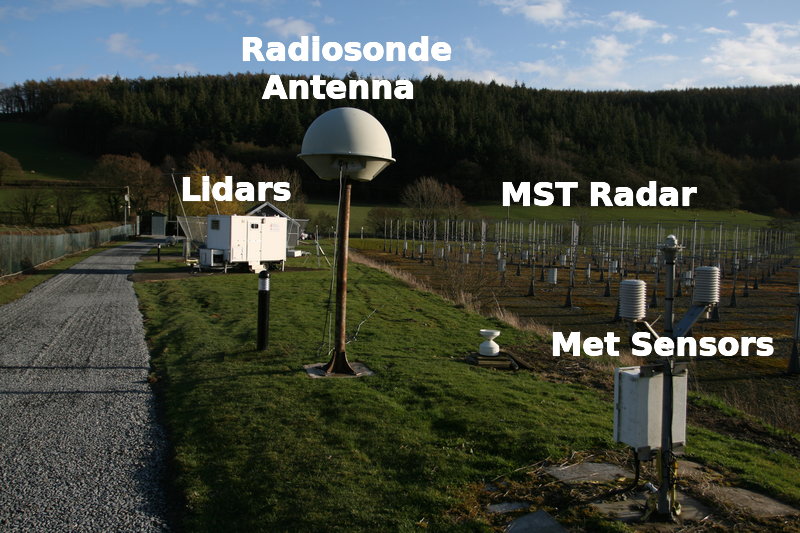 The National Centre for Atmospheric Science (NCAS) Capel Dewi Atmospheric Observatory (CDAO) is located at 52.424500°N, -4.0054665°E. This is a rural valley location, which is approximately 6 km to the east of the coastal town of Aberystwyth in west Wales, UK. Refer to the Location section below for more details.

Prior to April 2020, the CDAO was known as the Natural Environment Research Council (NERC) Mesosphere-Stratosphere-Troposphere (MST) Radar Facility.

NCAS operates a number of meteorological instruments at the site in support of its long term measurement programme. Most of the datasets span between 10 and 20 years. They are all openly-accessible through the Centre for Environmental Data Analysis (CEDA). NCAS also provides access to output from the Weather Research and Forecasting (WRF) mesoscale model for this location.

AMOF can support projects at the CDAO in a number of ways:

An application for facility support must be submitted in such cases.

All instruments are operated on a quasi-continuous basis. There are occasional breaks in coverage as a result of maintenance work or problems with equipment.

Follow the links to find out more about the CDAO instruments that measure the following parameters:

A Noctilucent Cloud (NLC) Camera is operated at the Chilbolton Atmospheric Observatory in support of the M-mode observations made by the MST Radar.

The following principles apply to the data (including photographs taken by automatic cameras) and plots for instruments operated by the Capel Dewi Atmospheric Observatory.

This section covers the following topics: 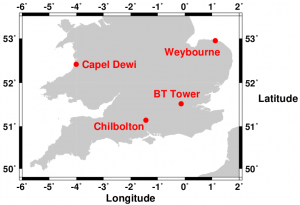 The Capel Dewi Atmospheric Observatory (CDAO) is located at

This is within a rural valley, which is approximately 6 km to the east of the coastal town of Aberystwyth in west Wales, UK. Refer to the Climatology section below for details of how the valley affects the winds measured by the Vaisala WXT510/520 wind sensors. Winds are also measured by the Campbell Scientific surface wind sensors at a hill-top location 3 km to the west of the site. These are more representative of the larger scale flow.

The land to the west of the CDAO is characterised by small hills. The land to the east is dominated by the Cambrian Mountains. These rise to a high point of 752 m amsl at Pumlumon Fawr (known as Plynlimon in English), which is approximately 16 km to the ENE. The terrain map below covers the same area as the Ordnance Survey Landranger 135 map. It is based on the the Ordnance Survey OS Terrain 50 dataset, which is openly-accessible under a (UK) Open Government Licence. 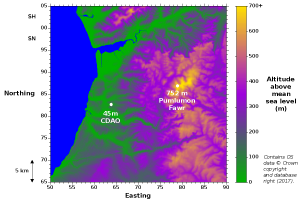 The annual rainfall is typically between 900 and 1100 mm.

Temperatures are relatively mild owing to the site’s proximity to the west coast of Wales. Nevertheless, they can drop to between -5°C and -10°C, notably during an exceptionally cold period in late November/early December 2010.

The wind roses below show the distributions of surface wind (from) direction for measurements made at Frongoch and at the CDAO site, which are 3 km apart. They are based on 1 minute interval data for the period 2007/12/22 – 2014/11/21. The Frongoch measurements are made from a 10 m tower at a hill-top location (140 m amsl) – see Location section above. Consequently they can be considered to be representative of the broader scale flow. However, the CDAO site is located within a valley, which rises up from an altitude of 50 m to 140 m on either side, is approximately 1 km wide, and is aligned in an ENE-WSW direction. This constrains the wind to the up-valley and down-valley directions. It can also give rise to turbulent events, characterised by unusually fast and rapidly-varying winds, when the direction of the broader scale flow is perpendicular to the alignment of the valley. 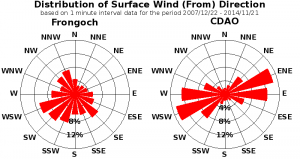 Mountain wave activity is a common occurrence at this location. This gives rise to vertical wind velocities of the order of +/-1 m/s, which can be observed by the MST Radar. It can also give rise to lenticular cloud formations, which are sometimes apparent in the images taken by the sky-camera – see example video 1 and example video 2.