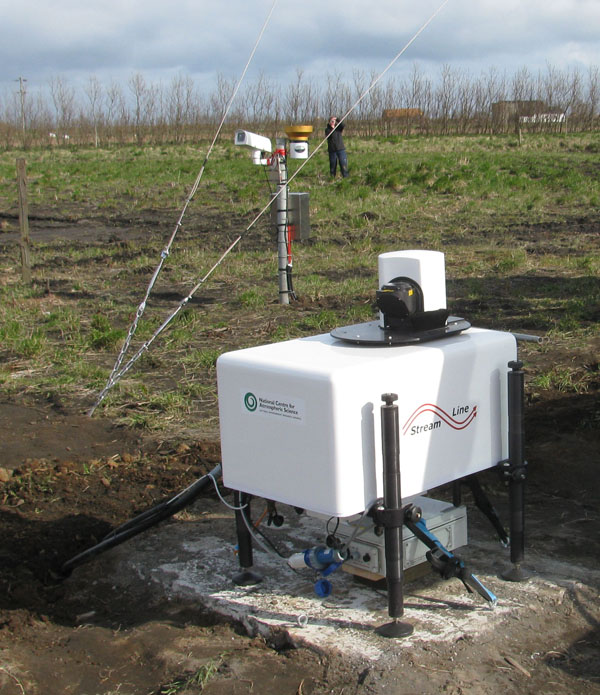 This is a 1.55 μm eye-safe (Class 1M) scanning micro pulsed LiDAR providing profiles of aerosol backscatter coefficient (β) in units of m-1sr-1 and radial velocity in ms-1 at user-specified azimuth and elevation angles. This system has additional Doppler and depolarisation channels. A 3 point scanning algorithm is supplied for automated wind profile measurement: profiles of wind speed and direction can be obtained at a minimum of once every two minutes.

Signal analysis, data retrievals, and data storage are performed by a PC system onboard the instrument. Users can operate the instrument remotely via the internet (not wireless) that is: users can program custom scan patterns and monitor performance. The operational software allows the user to test out head positions for a scan, level the instrument, and schedule how often the LiDAR comes out of its default operation (vertical observation or STARE Mode) to perform an operation. An internal GPS provides accurate system timing and instrument position while the extended temperature facility provides an operational temperature range of -20°C to 40°C: at temperature > 40°C this the system will automatically shutdown.

Scattering of electromagnetic (EM) waves by any system is related to the heterogeneity of that system: heterogeneity on the molecular scale or on the scale of aggregations of many molecules. Regardless of the type of heterogeneity, the underlying physics of scattering is the same for all systems.

Matter is composed of discreet electric charges: electron, protons. If an obstacle, which could be a single electron, an atom or molecule, a solid or liquid particle, is illuminated by an EM wave, electric charges in the obstacle are set into oscillatory motion by the electric field of the incident wave. Accelerated electric charges radiate EM energy in all directions: it is this secondary radiation that is called the radiation scattered by the obstacle. In addition to reradiating EM energy, the excited elementary charges may transform part of the incident EM energy into other forms (thermal energy for example), a process called absorption.

Everything except a vacuum is heterogeneous in some sense. Even in media that would usually be considered to be homogeneous (pure gases, liquids or solids), it is possible to distinguish between different heterogeneities if you have a fine enough probe: therefore all media scatter light. Scattering can be either:

Elastic: wavelength of the EM radiation is conserved.

In-Elastic: wavelength of the EM radiation is NOT conserved.

As an illustration, imagine throwing a white ball at a wall: if the ball comes back white the scattering was elastic, it comes back a different colour it was in-elastic.

The shape and homogeneity of the scattering body composition also have an effect on the polarisation of the scattered light. The electric field vector of an electromagnetic wave at any instant in time displays some orientation in space and this orientation can be fixed (linearly polarised), or rotating with time (circularly or elliptically polarised). Changes in the orientation of the electric field vector occurring on when the light is scattered are termed depolarisation and are predominantly caused by internal reflections. For a purely spherical body that is homogeneous in composition backscattered light is polarised in the same plane of polarisation as the incident light. The degree of depolarisation depends on the amount and complexity of the body’s deviation from sphericity, homogeneity of refractive index and relative size of the contribution to the refractive index of absorption: backscatter depolarisation is confined to particles that are not overwhelmingly absorbing.

A LiDAR (Light Detection And Ranging) is an optical instrument that comprises a transmitter to project pulses of light into the atmosphere, a telescope to collect the light scattered, and some electronics to analyse the intensity of the scattered light collected. Such systems can be arranged such that the transmission and collection units are physically separated (bi-static) or co-located (mono-static). For mono-static systems, the local arrangement of the transmission and collection elements can also vary with either the transmitter alongside the telescope or transmission is through the telescope. The latter arrangement is the case for the HALO LiDAR.

The HALO LiDAR uses light with a wavelength of 1.55 μm. As the intensity of the light scattered is greatest when the scattering body is similar in size to the incident radiation this instrument “sees” the aerosol rather than the molecular components of the atmosphere. In addition to applying a mathematical retrieval algorithm to intensity profile measured in order to retrieve the Aerosol Backscatter Coefficient (β), the velocity at which the aerosol is moving along the beam is also determined using the Doppler effect – this is termed the radial velocity. Usually, the sign convention for Doppler analysis is that +’ve is towards the observer and -‘ve away, however for this system the meteorological convention of +’ve away (or up) and –‘ve towards or down is used. The ability to measure radial velocity coupled with the instrument’s movable head means profiles of horizontal wind speed and direction can be determined.

This Lidar also applies the same β retrieval algorithm to the light scattered and polarised at an angle of 90° to the transmitted light: this is the cross channel and the ratio of the β from the cross channel to the total β gives the depolarisation ratio δ. How the β from the two channels varies can provide a great deal of information about clouds.

Water clouds: The scattering bodies in this type of cloud are usually spherical and compositionally homogeneous and as such the backscattered light would be expected to undergo no depolarization, however, a depolarised signal is often observed. As the light penetrates the cloud and the cloud droplet concentration increases and scattering of near-backward rays into the LiDAR field of view occurs. It is only the truly backscattered ray that does not undergo depolarisation and these near-backward rays have some degree of depolarization so when light scattered into the LiDAR field of view a signal in the cross channel is detected. This parasitic signal increases as the cloud droplet size increases, with the depth of penetration and with cloud droplet concentration.

Ice clouds: δ for randomly orientated ice crystals increases as axis ratio increases: that is as the crystal habit changes from plate to column but even a thin plate ice crystal will cause a substantial depolarised signal in comparison to other atmospheric targets. Using ray-tracing theoretical values for δ can be determined, for example:

Mixed phase clouds: the use of depolarisation can allow for the identification of regions in a cloud of different phases (water or ice) and the zones of transition between them, however, this is restricted by optically dense clouds where the light can only penetrate a few 100 m. It can be used to detect ice virga and the transitional zone for light precipitation.

Precipitation: snow, hail, graupel, rain (from melting ice), and rain/drizzle (formed by coalescence) can all be distinguished. Snow and other rimmed particles give rise to large δ due to the complex shape and a large number of scattering planes. Even raindrops give rise to a depolarization signal due to their departure from the spherical as they fall, an effect that increases with increasing size: drizzle is small and almost spherical hence δ ~ 0, but typical millimeter size rain will induce some sort of δ response. Significant δs can also be induced in water droplets by collisions as this causes droplets to oscillate: the shape changes.

While every effort has been made by the manufacturer to provide accurate and calibrated data products, HALO Photonics does not currently guarantee the calibration of the data in absolute terms. Wherever and whenever possible instrument comparisons take place where, for example, wind profiles derived from a range of measurement sources are compared. It is the results of such comparison exercises together with continual monitoring both during and after a deployment, and the system diagnostics that allows the instrument scientist to determine if the system is operating optimally or requires manufacturer servicing and intervention.

The default output of the LiDAR is range corrected retrievals of aerosol backscatter coefficient and radial wind speed at user-specified azimuth and elevation angles.

An option is to operate the instrument to generate profiles of mean wind speed and direction. In this case, the data is presented in terms of height above the instrument.

that is it follows the meteorological convention. 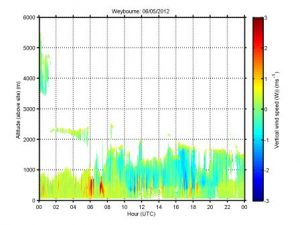 Radial Winds – when vertically pointing as in this example, radial winds are equivalent to vertical winds (the +’ve direction being away from the instrument that upward.) 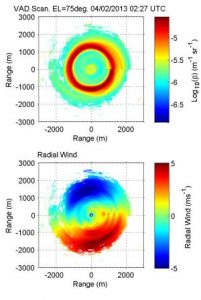 Backscatter and radial wind field for a volume scan: that is azimuth angle scans through 360° at a fixed elevation angle. 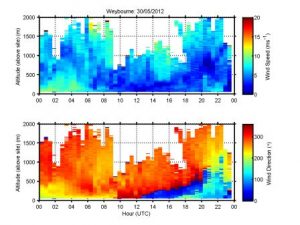