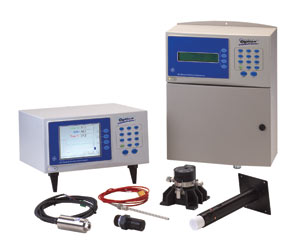 The dewpoint hygrometer provides a measurement of:

Optical condensation hygrometry is a precise technique for determining the water vapor content in gases by directly measuring dew point or frost temperatures. Using this technique, a metallic mirror is cooled until it reaches a temperature at which a thin layer of condensation begins to form on it. The dew layer is detected optically, and the mirror is held at that temperature. The mirror temperature, measured with a platinum resistance thermometer, is an accurate indicator of the dew or frost point. Because these hygrometers are so accurate, they are widely used as a standard in many of the world’s metrology laboratories.

The condensate mirror is illuminated with a high-intensity, solid-state, light-emitting diode

(LED). A photodetector monitors the LED light reflected from the mirror. The photodetector is fully illuminated when the mirror is clear of dew, and it receives less light as dew forms. A separate LED and photodetector pair are used as a known reference to compensate for any thermally induced changes in the optical components. The photodetectors are arranged in an electrical bridge circuit, the output current of which is proportional to the light reflected from the mirror. The bridge output controls the electrical current to the thermoelectric cooler. A large bridge current develops when the mirror is dry, causing the mirror to cool toward the dew point. As dew begins to form on the mirror, less light is reflected, and the bridge output decreases. This, in turn, causes a decrease in cooling current. A rate feedback loop within the amplifier ensures critical response, causing the mirror to stabilize quickly at a temperature that maintains a thin dew or frost layer on the mirror surface. A precision thermometer element embedded within the mirror directly monitors this dew point temperature.

The instrument is calibrated against a primary humidity standard as and when required.

The hygrometer control unit and sensor should be operated from an air-conditioned laboratory. A ¼” sampling line should be located outside the laboratory and secured to the common sampling point, ensuring that no water can enter the line. 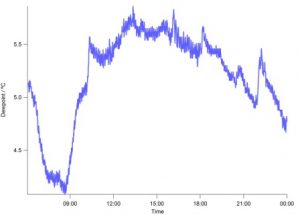