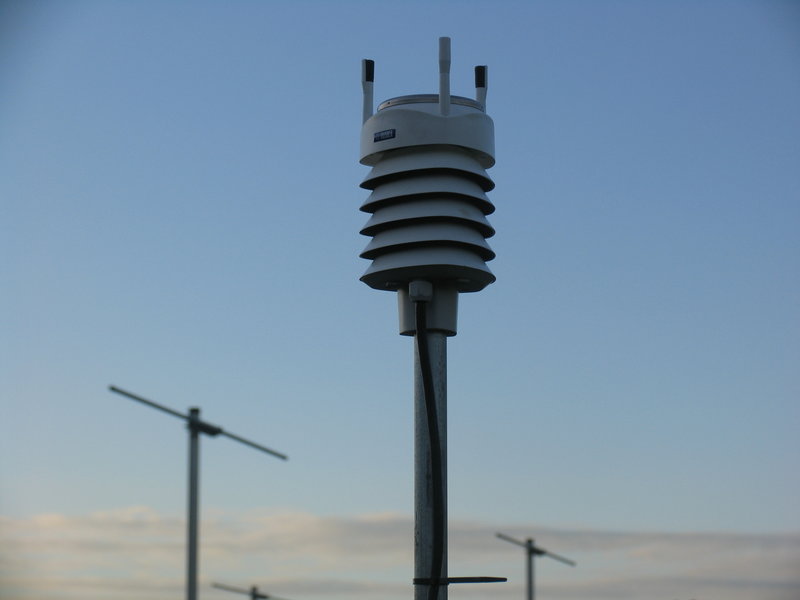 A Vaisala WXT510 (followed by a Vaisala WXT520) has been operated at the National Centre for Atmospheric Science (NCAS) Capel Dewi Atmospheric Observatory (CDAO) since December 2007. The WXT510 and WXT520 are essentially identical instruments, which record the following surface meteorological parameters at 1 minute intervals in three separate measurement cycles:

WARNING The direction of the winds is tightly constrained by the ENE-WSW alignment of the valley in which the WXT510/WXT520 is located. Refer to the Climatology section of the Capel Dewi Atmospheric Observatory page for more details. Consequently, the WXT510/WXT520 wind data are only useful for studies of valley flows, including turbulent events characterised by unusually strong wind speeds. For an indication of the broader scale atmospheric flow, use data from the Campbell Scientific surface wind Sensors at the nearby Frongoch site.

Summary of the WXT510 dataset (available through the Centre for Environmental Data Analysis, CEDA)

Summary of the WXT520 dataset

The WXT510/WXT520 is mounted on a pole at 1.9 m above ground level, 15 m to the north of the CDAO site bungalow. This is at the upper limit of distances over which RS232 data transfers can be used.

The timings of the 3 independent measurement cycles (PTU, Precipitation, and Wind) are determined by the instrument’s internal, free-running clock. The data messages are recorded by a Network Time Protocol (NTP) enabled data logging computer together with the time (to the nearest second) at which they were . This may occasionally lead to apparent variations in the sampling interval of +/- 1 s, although the samples can be assumed to be equally spaced in time. In the case of a loss of the power supply to the instrument, the measurement cycles will not (necessarily) restart at the same number of seconds past each minute when the power supply is resumed.

The primary reason for operating a WXT510/WXT520 at the Capel Dewi Atmospheric Observatory is to be able to identify problems with the the tipping bucket rain gauge, which is one of the Campbell Scientific Surface Meteorological Sensors. The latter is prone to blockages of the inlet and to problems with the tipping mechanism.

By contrast, the WXT510/WXT520 uses a RAINCAP (R) piezoelectric sensor, which has an area of 60 cm2. The signal generated by the impact of a single raindrop is proportional to its volume. Internal signal processing is used to differentiate between the signals generated by rain, hail and undesired sources. Data messages are only generated for the duration of a precipitation event, when they are available at 10 s intervals. The rates represent the mean values over the preceding 60 s. Within the first 60 s of a precipitation event, the rates are evaluated only over the period since the start time of the event. The rainfall and hail accumulations represent the amounts since the previous message. The instrument will occasionally produce messages with zero rain/hail rates. These appear to be triggered by rates that fall below the precision of the messages.

The time intervals between the end of one precipitation event and the start of the next one will not (necessarily) be an integer multiple of 10 s.

The study comparing between the two sets of measurements will be written up as a technical report. Contact the instrument scientist if you would like to find out more in the short term.

Wind speed and direction are measured by a WINDCAP (R) sensor. This consists of an array of three equally-spaced ultrasonic transducers (approximately 11 cm apart) in a horizontal plane. The time it takes for sound to travel between each pair of transducers depends on the temperature and the humidity of the air and on the component of wind vector along the direction joining the transducers. For a given pair of transducers, the effects of temperature and humidity are the same for the sound traveling in both the forward and the reverse directions. However, the effects of the wind vector are opposite. Measurements are required between at least two pairs of non-colinear transducers in order to derive the wind speed and direction. The use of measurements from all three pairs of transducers provides redundancy, which allows the wind information to be derived from the two pairs of transducers which provide the best quality signals.

Samples of wind speed and direction are taken 4 times a second over 3 seconds. From these 12 samples, the minimum, mean, and maximum values of speed and direction are recorded. Note that the minimum and maximum values of wind speed cannot be interpreted as gust speeds, since they are not derived from measurements made over the whole minute that they represent.

The determination of wind direction depends on the the instrument having been aligned accurately with respect to true North. The accuracy of this alignment is estimated to be a few degrees. No attempt is made to calculate the wind direction when the speed drops below 0.05 m s-1. Instead, the last calculated direction is used until the wind speed rises back above 0.05 m s-1.

Daily data from the WXT510 are available in 3 separate netCDF files, i.e. one each for the PTU, Precipitation, and Wind data. These files predate the National Centre for Atmospheric Science (NCAS) data standard, but conform to the Climate and Forecast (CF) metadata convention.