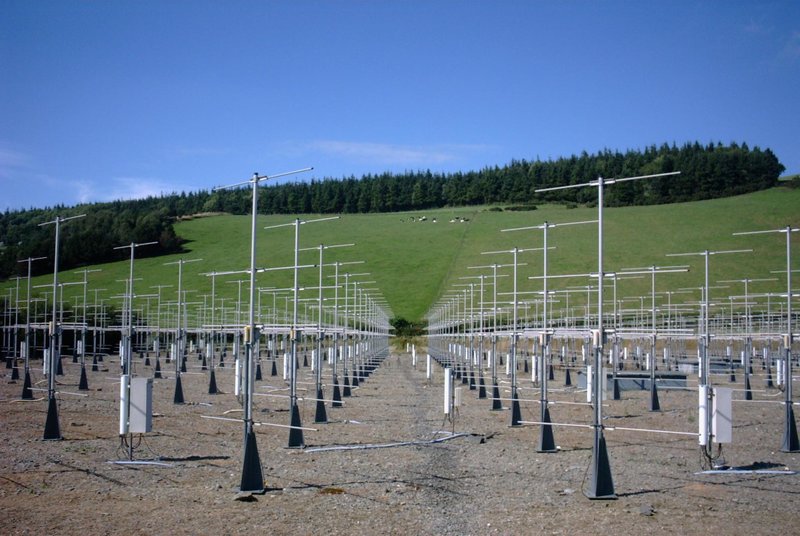 The 46.5 MHz National Centre for Atmospheric Science (NCAS) Mesosphere-Stratosphere-Troposphere (MST) Radar is located at the NCAS Capel Dewi Atmospheric Observatory (CDAO) near Aberystwyth in west Wales. It was previously known as the Natural Environment Research Council (NERC) MST Radar. It is operated in two modes, which cover different altitude ranges.

The radar has been operated on a quasi-continuous basis since late 1997 and contributes to NCAS’s long term measurement programme. These observations focus mainly on the ST-mode, but an M-mode observation has been included in the standard observation cycle since 2005.

Lower Very High Frequency (VHF) radar signals are primarily scattered from ‘clear-air’ targets, i.e. structures in atmospheric refractive index that have scale sizes of half the radar’s wavelength (approximately 3 m) along the beam pointing direction. Scatter from hydrometeors, aircraft and ground-based targets can also occasionally be detected. The refractive index depends on humidity (within the lowest 10 km of the atmosphere), on air density (within the lowest few 10s of km), and on free electron density (above 50 km).

The radar return signals are parameterised by their power, Doppler shift, and spectral width. The signal power depends on the vertical gradient of (potential) refractive index and so relates to atmospheric structure. The Doppler shift depends on the radial component of the wind along the beam pointing direction. The spectral width depends on the intensity of any turbulence within the radar observation volume. However, the values must be corrected for the effects of so-called beam-broadening, which depends on the horizontal wind speed and on the width of the radar beam.

The basic unit of MST radar observation is referred to as a dwell. This involves accumulating range-sampled receiver signals over a large number of successive transmitter pulses (typically covering a period of 21 s in the case of the NCAS radar). The time series of samples for each range gate is converted into Doppler power spectrum through the application of a discrete Fourier transform. These spectra are processed in order to identify signals and to parameterise them.

The Doppler Beam Swinging (DBS) technique involves cycling through a sequence of dwells with different beam pointing directions. The minimum requirement for deriving the three dimensional wind vector is for observations to be made in the vertical direction and at an off-vertical angle in two orthogonal azimuths. This is referred to as the 3 beam technique. The five beam technique requires the off-vertical beam observations to be made in four orthogonal azimuths. This provides redundancy and allows for self-consistency checks to be made. The NCAS MST radar typically makes use of the 5 beam technique.

The radar began making observations in 1989 and has been operated on a quasi-continuous basis since late 1997. Its observations contribute to a long term measurement dataset irrespective of whether or not the radar is supporting a field campaign. The standard observation cycle, which takes just over 5 minutes, makes use of both the ST and M modes at 300 m range resolution. The radar can be operated using a non-standard observation cycle on request. The vertical velocity data are typically used without averaging since fluctuations can occur over time scales of considerably less than 30 minutes.

An application for access must be made if you would like the radar to support a field campaign. This is irrespective of whether or not you require the radar to be operated using a non-standard observation cycle. Non-standard observation cycles must typically be designed so that it is possible to derive horizontal winds at 300 m range resolution. Consequently it is important to discuss your requirements with the instrument scientist before submitting an application. You do not need to submit an application if you simply want to make use of historical data.

Most of the radar’s hardware is over 30 years old. It is subject to a continual programme of maintenance rather than to servicing at fixed intervals. The representativeness of the horizontal wind data has been established through a succession of studies. Although the radar is not calibrated in a formal way, the EUMETNET’s E-PROFILE programme provides monthly statistics of how the measured winds compare to those generated by models. This is how it is known that the accuracy of the data is comparable to that from radiosondes.

This section contains details about

Refer to the Access to the data section of the Capel Dewi Atmospheric Observatory page for general details about the file name format.

MST Radar data files contain a string with the format AARRR, where

Files that contain data of suspect quality within limited time-altitude regions are available through the archive. They contain the string suspect within the file name. Details of the affected region are contained within the comment global attribute of the file. Do not use these files unless you block the data within the affected region.