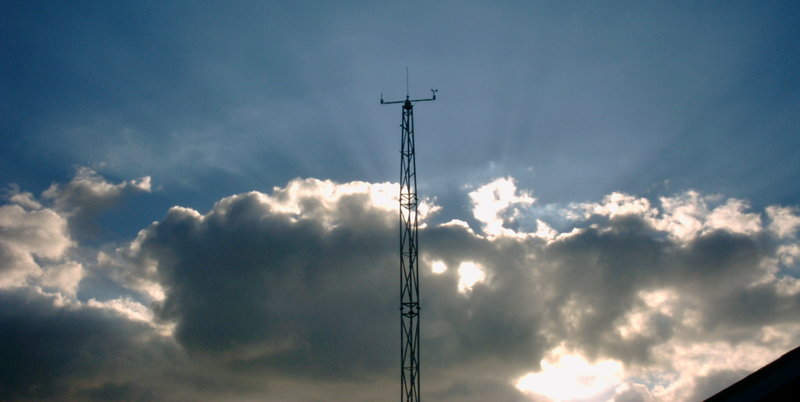 The Capel Dewi Atmospheric Observatory (CDAO) operates a wind vane and anemometer on a 10 m tower at nearby (3 km away) Frongoch Farm. The wind speed and direction measured at this hill-top location can be considered to be representative of the background flow. This overcomes the fact that the surface wind direction at the CDAO is tightly constrained by the orientation of the valley in which it is located. Refer the Climatology section of the CDAO page for more details.

Refer to the Data section below for more details about the data files.

A Campbell Scientific CR10 data logger was used to acquire the raw data until 4th June 2019, when it was replaced by a Campbell Scientific CR1000X. Both loggers sample(d) the sensors at 1 s intervals. However, the CR10 only made available one minute
representative values based on those measurements – i.e. minimum, mean, and maximum values. The CR1000X allows full access to the 1 s
samples, which will be stored in a new dataset in the near future.

The following operations were carried out by the CR10 in order to
derive the 1 minute representative values:

The data are currently only available in (ASCII) NASA Ames format files. Refer to Gaines and Hipskind (1998) for a full description of the file format. Here I will just describe the bare minimum that you need to know in order to read in the data. I’m using the convention that the first line/value number is 1 rather than 0. Where multiple values are given on a single line, they are separated by white space(s).

These values can be used to determine the mean wind speed (v_speed) and meteorological convention (i.e. from) direction (ϕ_from) and the minimum and maximum gust wind speeds (g_min and g_max, respectively)
as follows: