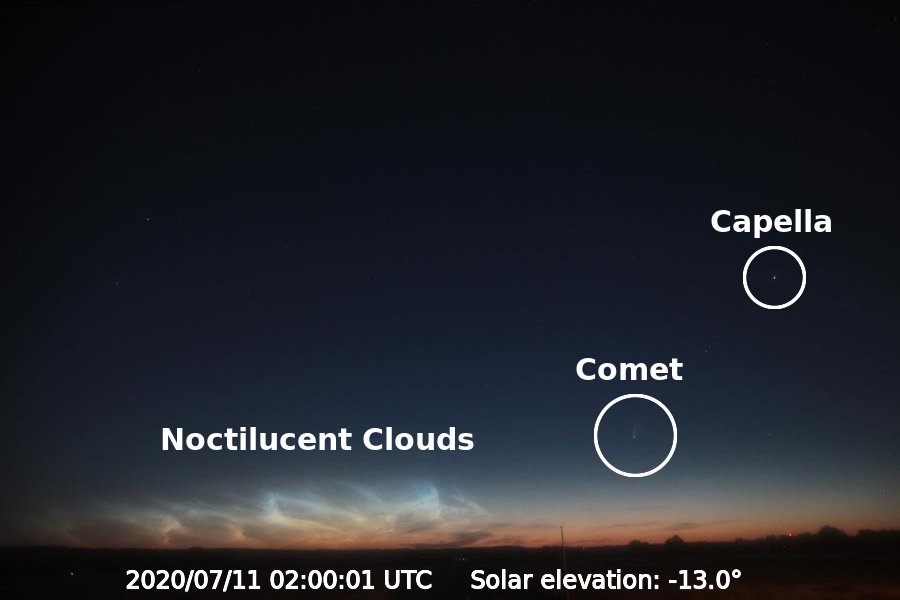 The National Centre for Atmospheric Science (NCAS) Noctilucent Cloud (NLC) Camera is located within the Receive Cabin of the Chilbolton Atmospheric Observatory (CAO). It is principally operated between dusk and dawn (at 5 minute intervals) during the months of June and July. Its observations are made in support of NCAS MST Radar observations of the related phenomenon of Polar Mesosphere Summer Echoes (PMSEs).

In the image above, the comet NEOWISE can be seen as well as NLCs. The brightest star is Capella in the constellation Auriga. See the Time-Lapse Videos section below for access to an accompanying video. 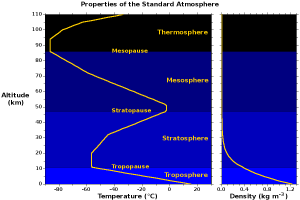 NLCs are a seasonal wonder of the natural world. They can only be seen from upper-middle and high latitudes during the mid-summer months (between mid May and mid August in the northern hemisphere). They are the result of ice crystals forming at the extraordinarily high altitude of 82 km. This is 70 km higher than virtually all other clouds seen at these latitudes and qualifies as being at the edge of space (the atmospheric density and pressure are approximately 100,000th of their values at sea level). NLCs can only be seen during twilight hours – hence the name noctilucent, which means night-shining. They are referred to as Polar Mesospheric Clouds (PMCs) when they are observed by satellite-borne instruments. 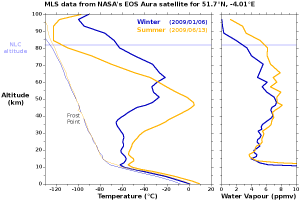 The vast majority (98%) of atmospheric water vapour is confined to the troposphere (which occupies approximately the lowest 12 km of the atmosphere at middle and upper latitudes). The overlying stratosphere (which occurs between altitudes of approximately 12 and 50 km) and mesosphere (approximately 50 to 90 km) are extremely dry, containing water vapour concentrations of below 10 parts per million by volume (ppmv). Nevertheless, during the mid-summer months the altitude where NLCs form becomes extraordinarily cold (and slightly more humid) as a result of air rising (and cooling adiabatically) over the summer polar region. Ice crystals can form where the temperature drops below a frost point of approximately -125 °C. 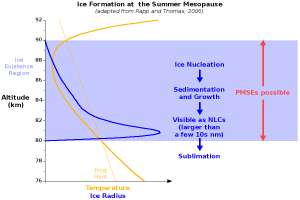 The ice crystals can only be seen as NLCs if they grow larger than a few tens of nanometres (nm) in size. This requires the cold conditions to extend over a depth of at least several kilometres and there being sufficient water vapour available. Even if the ice crystals do not grow sufficiently large to be visible, they can give rise to the radar phenomenon of Polar Mesosphere Summer Echoes (PMSEs).

NLCs can potentially be seen from anywhere within the British Isles, i.e. from the latitude band between 50° and 60° N. 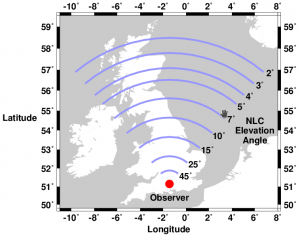 The extraordinarily cold temperatures (below -125°C) required for ice crystals to form occur almost daily between late May and early August at latitudes above 65°N. The further south you are, the less frequently they occur and the shorter the NLC season will be. It is rare for NLCs to extend below 53° N and it is exceptional for them to extend below 50° N. Nevertheless, because of their high altitude (82 km) they can be seen from up to 7° further south (approximately 800 km away). They will be at a very low elevation angle from this distance. The further north you are, the higher they will appear in the sky. The map above shows the potential location of NLCs for an observer at the Chilbolton Atmospheric Observatory (CAO) (51.15°N). For an observer at a higher latitude, the whole pattern simply shifts north. 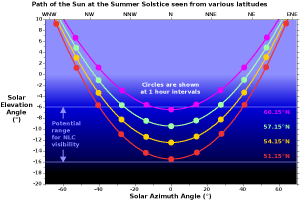 The further north you are, the less dark the mid-summer night sky becomes. At Lerwick in the Shetland Islands (61.16°N), the sky only just becomes dark enough to make NLCs visible on the night of the summer solstice (which occurs on 21st or 22nd June). The minimum solar elevation angle is slightly lower at all latitudes at the beginning and the end of the NLC season. This means that the solar elevation angle drops below 16° during the middle of the night for observers in southern England (51.15°N is the latitude of the Chilbolton Atmospheric Observatory (CAO) where the NLC Camera is located). At higher latitudes, if you are lucky you might be able to see NLCs continuously between dusk and dawn. However, it is more common for them to be visible during the dawn only.

The times at which the solar elevation angle is within the potential range for NLCs to be visible vary with latitude (and to a lesser extent with date and longitude). You will be able to find this information from a number of online resources, including the HM Nautical Almanac Office’s Websurf utility, for which you will need to choose the Alt_Az option.

The biggest limitations you will have for seeing NLCs are

The time-lapse videos covered in this section are published under a Creative Commons Attribution License. Anyone may download, view, and redistribute
copies.

Follow the link to the Centre for Environmental Data Analysis (CEDA) document repository link in order to download a copy.

The components of the NLC Camera:

These have been chosen to allow:

The choice of lens was not based on its zoom capability but on:

The only requirement for the camera body was that it could be controlled from a computer using gphoto software. This removes the reliance on the camera’s free-running internal clock. The image capture time embedded within the image file is overwritten with a value generated by the computer, whose clock is synchronised using Network Time Protocol (NTP). The time stamp refers to the start of the image capture period, which can last for several seconds in twilight conditions.

The camera is operated using its aperture priority mode. This allows the the widest possible aperture setting (f/2.8) to be selected, whilst the the ISO speed and exposure time adjust automatically to the level of light available. In order to maintain image quality (at the expense of an increased exposure time), the ISO speed is not permitted to drop below 800.

The camera is operated from within the Receive Cabin of the Chilbolton Atmospheric Observatory (CAO) because:

The camera is placed as close as possible to the window. Nevertheless, it needs to be enclosed within a light-proof box in order to prevent it from seeing reflections from the window of the lights on other equipment within the Receive Cabin.

The coordinates of the camera (51.145168°N, -1.4397500°E) have been determined using a Global Positioning System (GPS) receiver. The camera is 4.3 m above ground level, which has been estimated (from an Ordnance Survey map) to be 84 m above mean sea level (amsl). This gives an approximate altitude of 88 m amsl for the camera.

An elevation angle of approximately 18° has been chosen to capture as much of the sky as possible, whilst covering some of the ground for reference purposes. The camera’s pointing direction (in terms of both azimuth and elevation angles) is not fixed and will change occasionally when the camera is moved for maintenance purposes. The actual pointing direction can be estimated by analysing the position of stars that pass through the field of view.

The relationships between x/y pixel coordinates and azimuth/elevation angles are not linear. This is mainly the result of perspective distortion, which is a consequence of the camera’s pointing direction being elevated above the horizontal. There is also some mild lens distortion, but this is much less significant. Perspective and lens distortion are discussed in the following sections.

Perspective distortion is a consequence of viewing geometry. If parallel lines are viewed at any angle other than at 90° to the plane in which they lie, they will appear to converge. The shallower the viewing angle, the more obvious the effect becomes. Everyone will be familiar with this effect on horizontal lines, e.g. from looking down a long corridor. Note that although the viewing angle to the floor, in the illustration below, is reduced by kneeling down, the viewing angle to the ceiling is increased. Consequently the effect of perspective distortion on the ceiling is increased rather than reduced, as it is for the floor. 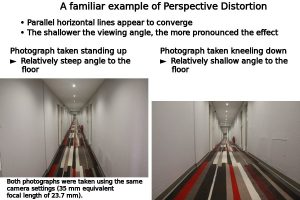 It might not be immediately obvious that vertical lines are also affected for any viewing angle than a horizontal one. For a photograph, the x coordinate of the convergence point will be in the middle of the image. The y coordinate will be above it for an upward viewing angle or below it for an downward viewing angle (in this context I am using the convention that the y coordinate increases from the bottom to the top of the image; the opposite convention is typically used for digital images). The convergence point will typically be outside of the field of view. 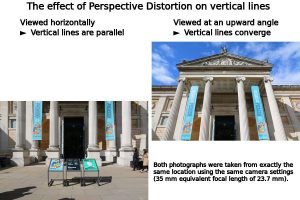 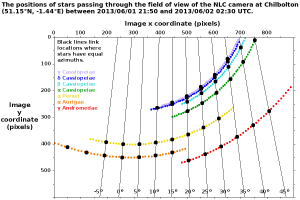 Although there are no actual vertical lines within the NLC camera’s field of view, implied vertical lines (the black lines in the illustration above) can be constructed by joining points with the same azimuth angle at different elevation angles. The small circles show the positions of 7 stars (at 5 minute intervals) as they pass through the NLC camera’s field of view. Their azimuth and elevation angles can be calculated for the time of each photograph. The black circles show the positions of the stars when they pass through azimuth angles of between -15° and +45° in 5° increments (by interpolating between measured positions to either side, if necessary). For each azimuth angle, the black line joins the circles with the highest and lowest elevation angles. Some points to note: