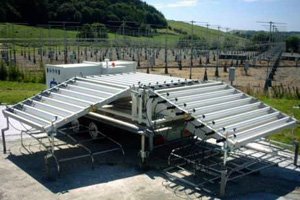 The Radar Wind Profiler is a ‘clear air’ pulsed UHF Doppler radar. It is used to remotely sense the wind speed and direction in the lower troposphere 24 hours a day, under all weather conditions. Wind profiles from the boundary layer wind profiler are sent to the Met Office operational team every 15 minutes, where they are used to aid the weather forecast. The wind profiler has been operated fairly continuously since August 2002 and all the data has been archived at the Centre for Environmental Data Analysis (CEDA). It is generally stationed at one of two main sites MRU Cardington, near Bedford or at the MST radar site, near Aberystwyth. The wind profiler is mounted onto a trailer so it is easy to deploy to different locations and has been involved in numerous field campaigns around Europe.

The radar consists of three panels to emit and receive three separate beams, each panel being an array of 64 collinear dipole antennas. The vertical beam from the central panel measures the vertical component of the wind. The two lateral panels situated at 90o to the back and side of the central panel provide the two oblique beams, enabling full wind vectors to be calculated.

The backscattered UHF radiation comes from two sources in the atmosphere. It is most sensitive to Rayleigh scattering from hygrometers but in the absence of precipitation, Bragg scattering occurs from refractive index gradients in the clear air on a scale of ½ a radar wavelength. The refractive index variations are caused by changes in humidity, temperature, and pressure but in the troposphere, the main cause is humidity fluctuations.

In addition to the wind speed and direction which are extremely useful for weather forecasting models, the wind profiler provides other information to the user. For example, the signal to noise ratio (SNR) profiles provides valuable insight into the structure of the atmosphere such as the height of the convective boundary layer and residual layers. The spectral width of the clear air signal is also of interest as it provides an indication of the turbulence.

Radars (Radio Detection And Ranging) as well as detecting fast jets and speeding cars can be used as remote sensors of the atmosphere.

The boundary layer wind profiler is a UHF Doppler radar that emits pulses of electromagnetic radiation at a frequency of 1290 MHz into the atmosphere and then listens to backscattered energy from the clear air.

By measuring the time delay between transmission and reception of the backscattered pulse, the range at which the target is positioned can be calculated.

The range equals the time delay multiplied by the speed of light and divided by 2 because the electromagnetic radiation travels to the target and then back to the receiver.

The electromagnetic waves emitted by the boundary layer wind profiler are reflected by a number of objects including aircraft and birds but it is the weaker echoes that result from atmospheric sources, that are of interest.

At UHF frequencies electromagnetic radiation is most sensitive to Rayleigh scattering from hygrometers (water particles) but in the absence of precipitation, Bragg scattering occurs from refractive index gradients in the clear air on a scale of ½ a radar wavelength (23 cm).

Refractive index variations are caused by variations in humidity temperature and pressure but in the lower atmosphere, the main cause is humidity fluctuations.

The Doppler effect is the change of wavelength caused by the motion of the target in relation to the observer. UHF boundary layer wind profilers make use of the Doppler principle to measure the radial velocity along a radar beam which is used to calculate the wind speed and direction.

The frequency shift of the backscattered energy is related to the velocity at which the reflector is moving along the radar beam by this equation.

νr= radial velocity (component of velocity along the beam).

Essentially, the radar provides a picture of the movement of a volume of air (the target). By measuring the radial velocity in three directions the three components of wind can be calculated using trigonometry. Note that the Doppler frequencies of atmospheric targets are very small (maximum of kilohertz) with respect to the transmitted frequencies.

The radar wind profiler requires an “OfW 225” – non-operational licence from Ofcom formally known as an “RA 322” licence. The licence has to be applied for and usually takes about 8 weeks to be granted and currently costs £50. Other countries will probably require a similar kind of licence.

The radar wind profiler is tested by the manufactures Degreane Horizon at least once a year under the maintenance contract.

The 15 minute data from the low mode is sent in near real time to the Met Office, where it is sent into the EUMETNET observation program. The quality of the wind speed and direction are monitored on a daily basis by the E-Profile network (formally known as the E-WINPROF network). The E-PROFILE Network Manager based at MeteoSwiss sends week daily reports on the radar wind profiler data and if there is any missing or suspicious data.

The user will be expected to supply electricity, internet access, construction of a clutter fence if desired, and a sufficiently long Ethernet cable.

The Radar Wind Profiler folds up onto a compact trailer that can be towed behind a suitable vehicle such as a Land Rover as shown in the photo below.

If you are shipping the instrument, it could be packed in a 40ft container and there would be lots of space for other equipment in the same container.

The Radar Wind Profiler requires a relatively flat and firm piece of ground within 10m from a power supply either mains or generator. The wind profiler has jacks on 4 corners so it can be levelled front to back and side to side up to 0.3m. An internet connection is preferable but not essential. It is useful as it enables remote monitoring of the instrument and automated backing up the data can be set up.

The site requires an electricity supply. Internet access is normally required so that the instrument can be monitored remotely and data can be backed up to an external server.

An indoor space is required for the processing computer. It is possible that this could be one of our mobile laboratories if office space is not available.

The Degreane software is fairly robust at detecting the clear air signal from the ground clutter using sophisticated multi-peak identification. Although the instrument performs well without a clutter screen, the data quality is improved by operating the wind profiler within a clutter screen. A clutter screen is basically a fence type structure surrounding the radar wind profiler made out of either scaffolding poles or wood and covered with a ¼ inch steel welded mesh. 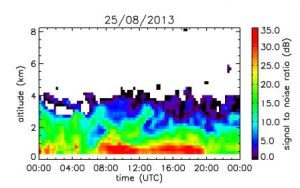 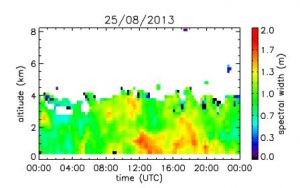 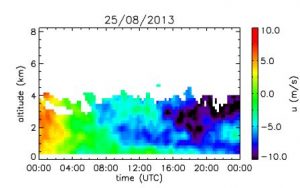 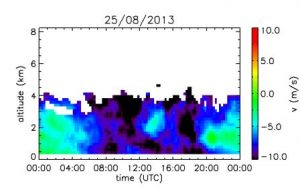 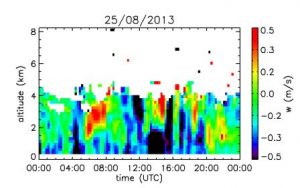