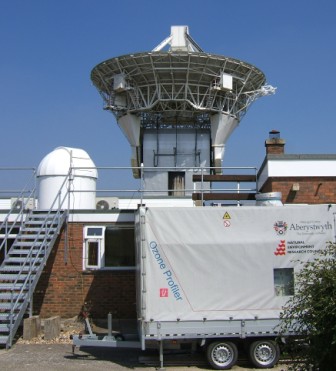 The aerosol backscatter coefficient is measured in m-1.sr-1 and is a measure of how much light is reflected off particles and droplets in the atmosphere. This value is related to particle size and particle number although the two cannot necessarily be computed from this single value.

In total the instrument uses five wavelengths of laser light in the ultra violet spectrum: 266nm, 289nm, 299nm, 316nm and 355nm, which are transmitted sequentially. The resulting time resolution is 3 minutes and the height resolution for aerosol backscatter and ozone is 7.5m and about 50m, respectively. The maximum range for aerosol backscatter and ozone can be up to 8km and 2-3km, respectively although this can vary depending on atmospheric conditions.

Ordinarily, this instrument can be used to measure atmospheric boundary layer properties, such as convective boundary layer depth, convective cloud base and also heights of residual layers using the aerosol backscatter coefficient. Combined with ozone mixing ratio its is also possible to estimate the source of air masses. It is also possible to convert the lidar to measure depolarisation ratio, which allows detection of volcanic ash. Research is being carried out into the possible upgrade to measure aerosol extinction and water vapour mixing ratio.

LIDAR (LIght Detection And Ranging) systems operate by transmitting short pulses of laser light into the atmosphere and analysing the light reflected by air, droplets and particles. This is reflected light is referred to as backscattered light (or power) as it is scattered by the object in question.

The dimensions of the trailer are:

Ethernet/mobile broadband connection is recommended as it allows timely analysis of the data and detection of any faults.

A fence or other method is recommended to prevent unauthorised access.

The aerosol data gathered from the lidar is mostly self-calibrating but for ozone data quality occasionally intercomparison experiments are carried out using aircraft, ground based measurements or ozonesonde flights. The original manufacturer Elight Laser Systems is no longer in business, so the maintenance is carried out by the instrument scientist and an expert lidar technician.