Occupies spaces for two aircraft racks aboard the FAAM aircraft 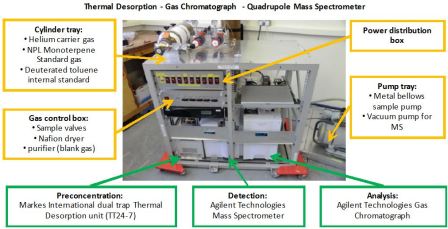 The aircraft GCMS is capable of reporting mixing ratios of a wide range of volatile organic compounds in the atmosphere. The instrument is designed to be operated aboard the FAAM146 research aircraft and can be configured and operated in a number of subtly different ways to target specific compounds of interest. A brief description of the typical instrument operation is given below, but this may vary depending on the application.

Briefly, Samples of air are drawn, from a dedicated inlet fitted to the window of the aircraft, and pressurised into the instrument using an all stainless steel assembly metal bellows pump. Samples are preconcentrated using a MARKESTT-247 preconcentrator fitted with two identical Tenax-TA adsorbent traps. The preconcentrator is operated such that it collects a sample on one of the adsorbent traps (held at 10 °C typically) while analysing the contents of the other (desorbed at 230 °C typically), thus no time is wasted while the traps are in their cooling phase. During desorption a flow of helium carrier gas is used to transfer the VOCs onto the GC column. At this time a flow of liquid carbon dioxide is directed to the front-end of the column and used to cool it to a temperature of around -67 °C which is sufficient to hold all of the VOCs of interest in this portion of the column for around 30 seconds after which the liquid carbon dioxide flow is stopped and the column rapidly heats up to normal oven temperature and releases the previously trapped VOCs in a small/focussed band which improves the chromatography of the peaks of interest. After separation on the GC column, the VOCs are detected and identified using the quadrupole mass spectrometer.

The aircraft GCMS (gas chromatograph coupled to a mass spectrometer) is used to measure atmospheric concentrations of a range of volatile organic compounds (VOC) for selected deployments of the FAAM research aircraft. The instrument can be operated in subtly different ways depending on the objectives of each study. Here follows a summary of the main aspects of the measurement technique.

Many of the compounds of interest are present in the atmosphere at levels too low for quantitative detection, therefore, large volume sampling involving a concentration stage using an adsorbent trap is required before the samples are analysed.

As the adsorbent traps (preconcentration stage) are heated to desorb the compounds of interest, they are transferred onto the GC column in a stream of helium carrier gas. The desorption rate (heating rate) of the traps must be rapid in order to transfer the compounds, particularly lightweight/highly volatile compounds, in a short/focussed band which is required for good chromatography. In this particular system the adsorbent traps are large and so the desorption is relatively slow leading to poorly resolved peaks and loss of sensitivity for the volatile compounds. In this instrument liquid CO2 is used to cool the front end of the GC column during the desorption of the adsorbent traps which has the effect of pre-focussing the analytes at the front end of the column. Once the liquid CO2 flow is stopped the column rapidly heats up and the peak shape of the volatile compounds is much improved.

Gas chromatography is a separation method that relies on differences in partitioning behaviour between a flowing mobile phase (carrier gas) and a stationary phase (column coating) to separate the components in a mixture.

Mass spectrometry is a commonly used tool for identification of unknown compounds in a sample. There are many variations in mass spectrometers, but all consist of an ion source, mass analyser and finally a detector.

The source of ions for the aircraft GCMS is from impact of electrons produced by a heated filament (EI). These are accelerated across the ion chamber toward the collector anode. Collision of electrons with organic molecules results in a transfer of energy sufficient to ionise most molecules (10-20 eV). The positive ions and fragments formed are specific to each compound, forming a “fingerprint” for a given molecule, and are passed into the mass analyser by means of a small repelling potential in the source.

The mass analysers used here is a quadrupole mass analyser. Four rods in a quadrant formation surround the beam of ions with opposing rods being electrically connected. Ions of specific mass to charge ratio (m/e) can be allowed to move to the detector end of the instrument, while others can be removed due to the potential difference between the rods.

The MARKES preconcentrator is serviced each year by a qualified engineer. Regular checks are made on the integrity of the traps and these are replaced when deficiencies become apparent.

The instrument is calibrated against a number of different standard mixtures (depending upon the aims and target compounds of each project) which are regularly checked against the calibration scales of the NCAS-AMF dual channel gas chromatograph.

Deployment of the instrument typically requires an NCAS Instrument Scientist operator, in which case the consumables required will have already been arranged by them for the deployment.

In General, the instrument will be transported and installed on the FAAM 146 aircraft by the Instrument Scientist.

Approximate dimensions of the rack and equipment are:

Not relevant for this instrument – operates aboard the FAAM 146 aircraft.

The aircraft GCMS is capable of reporting mixing ratios of a wide range of volatile organic compounds in the atmosphere. The instrumental method can be set-up in a variety of ways to target particular compounds. Typical target compounds include:

A broad range of hydrocarbons and VOCs (within the range C5 – C12).

Specific hydrocarbons and VOCs (within the range C5 – C12) a limited number at improved sensitivities.